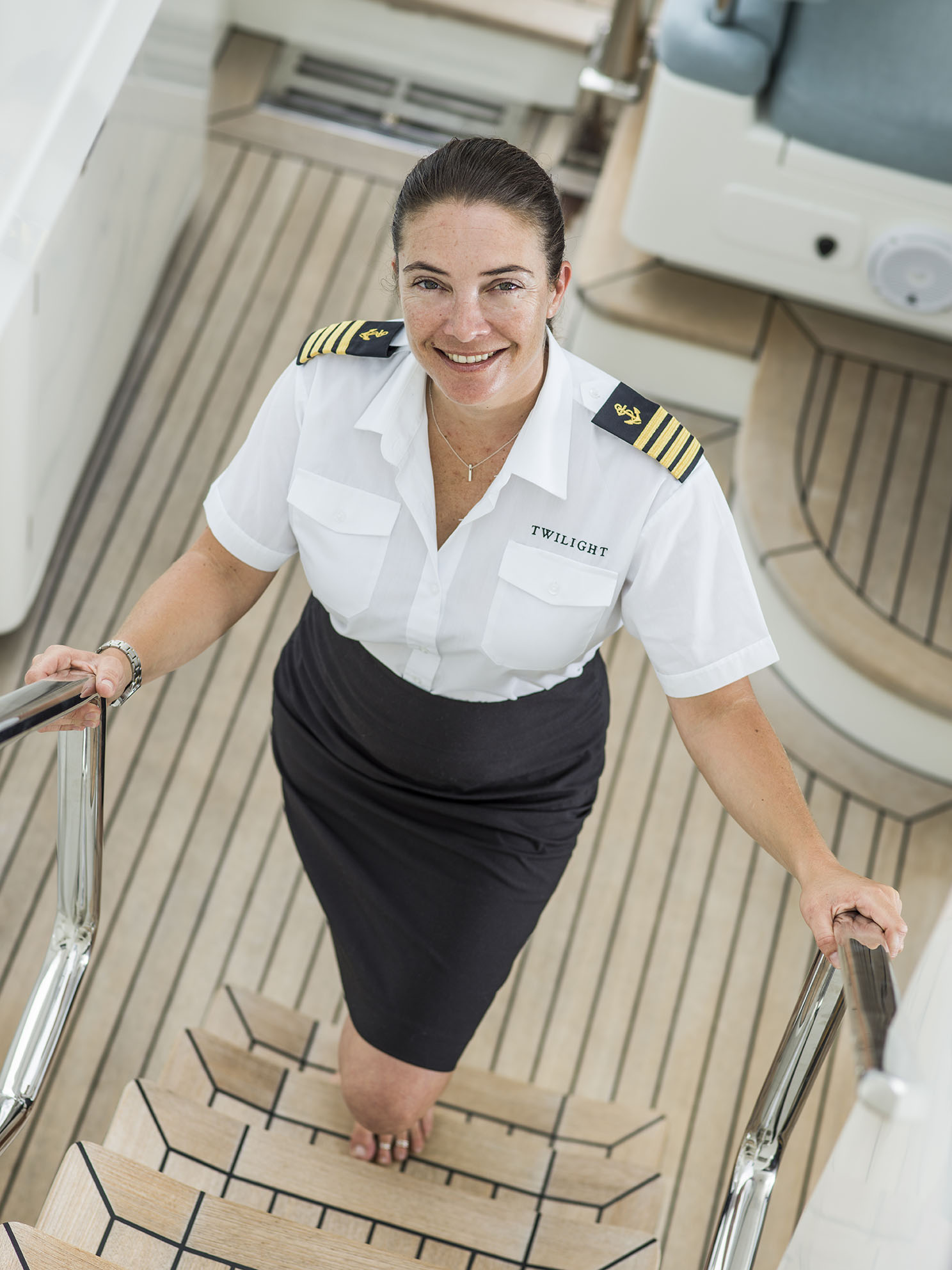 A Captain for over a decade, Kathy’s career in Superyachts has taken her a long way from her original home in Cape Town, South Africa.

Her most recent role was as Skipper on the 36 metre sailing ketch “Tiziana”, a well known Med-based charter yacht with a great reputation which cruised all over the Mediterranean during her time on board.

Immensely proud to be amongst the few female superyacht captains, Kathy learned her trade at a very early age. Her father has been huge influence in her life and his passion for sailing surrounded and inspired her formative years when they sailed together in Cape Town and on the Vaal dam in Johannesburg.

Soon realizing sailing as her first love, Kathy sought to make it her chosen profession. Following the completion of her qualifications Kathy trained and worked as a full-time scuba diving instructor, gaining further valuable experience restoring boats and undertaking Yacht deliveries on her journey to achieving Captain status.

Kathy and her dedicated hands-on team are delighted to welcome you on board Twilight, and together they will work hard to make your time on Twilight a truly unforgettable and wonderful experience. 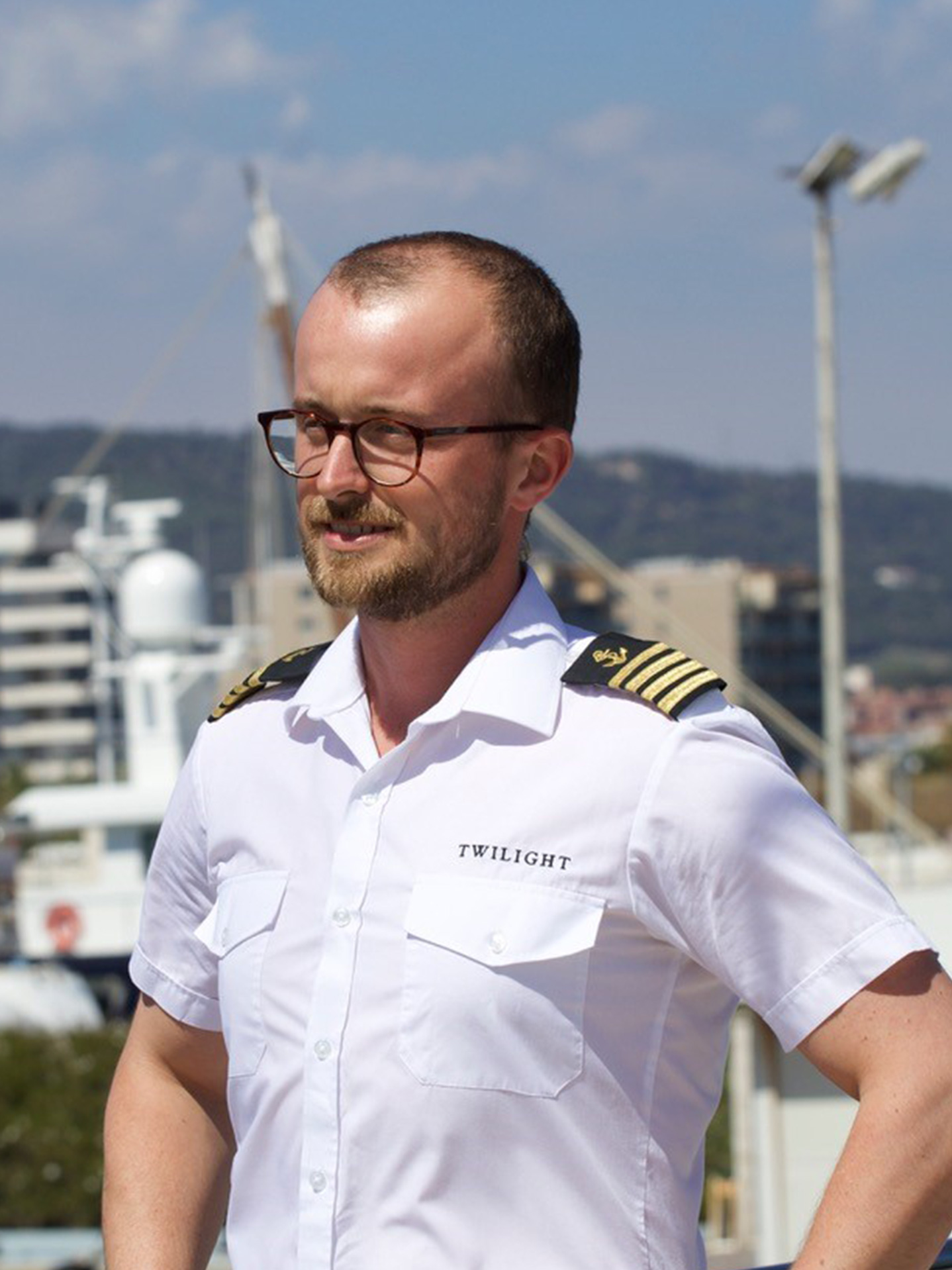 A true sea lover, Louis was born and raised in the seaside town of Howth, Ireland and has had the honour of cruising vessels from 30’ to 196’ in length. Having joined Twilight in 2018 he has been wowed by her shear beauty, elegance and performance. Louis coupled with his first class crew endeavours to make your experience onboard as unforgettable as possible.

Having sailed from the age of 7 on all sorts of dinghies, Louis solidified his love for sailing when he and his father took on the restoration of a small sail yacht based in Ireland where she is currently berthed.

When not onboard Twilight Louis occupies his time by sailing one of his two sailing vessels exploring future cruising grounds, Sailing Vessel Lady A has become his home from Twilight.

While sailing is Louis’ number one passion he is also greatly fond of photography, diving, wakeboarding and all things active. 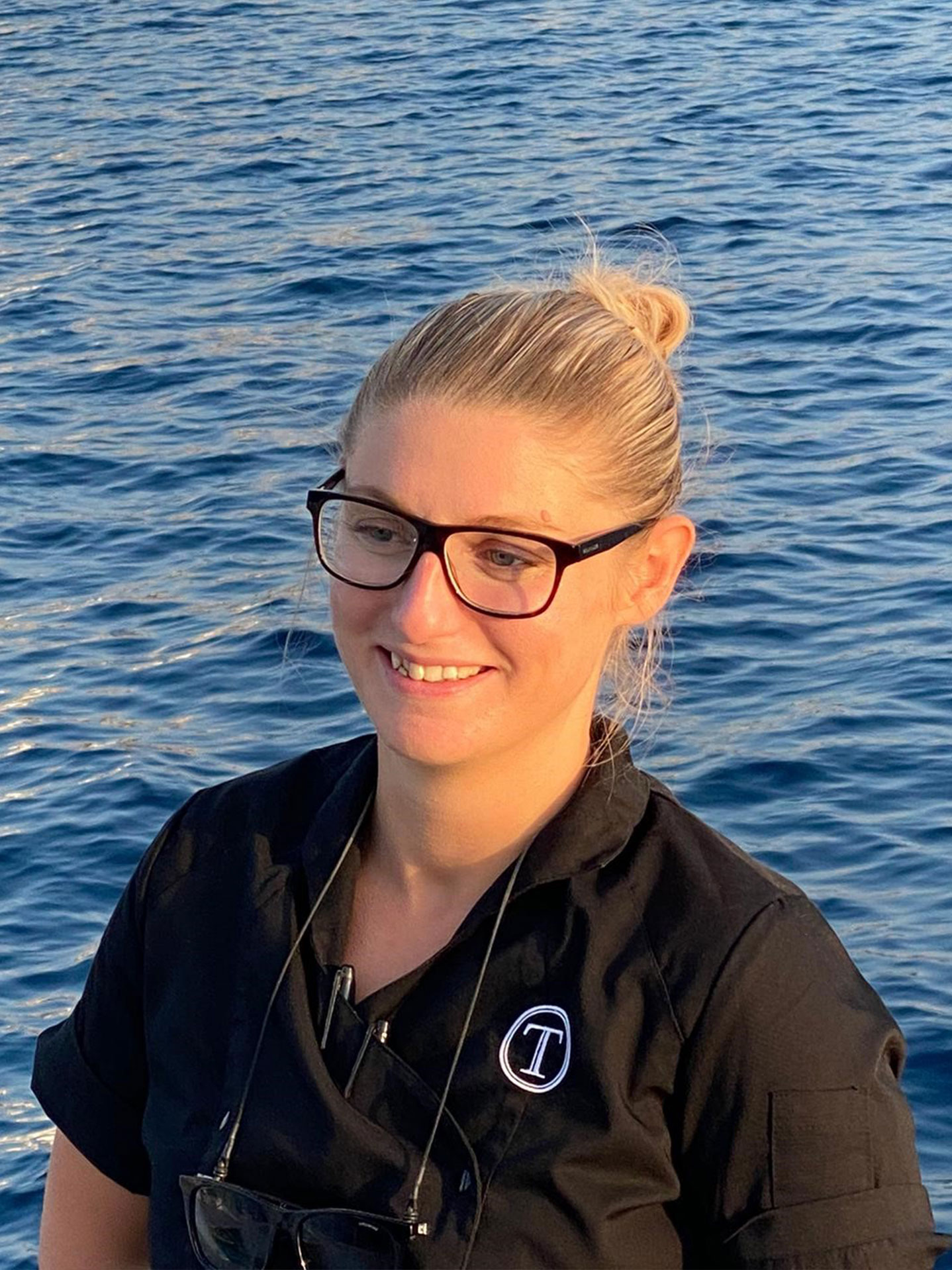 Born and raised in Dublin, Ireland – Paula began her career in Dublin’s Four Seasons Hotel, while studying for her apprenticeship with Fáilte Ireland.

Her great passion for local artisanal producers and season led cooking began after moving to London where she resided for several years.

Most of Paula’s career has been spent working in Michelin starred restaurants in both London and Dublin, including internationally renowned restaurants such as Gordon Ramsay’s Maze and Ross Lewis’ Chapter One.

She was a finalist and runner-up in Ireland’s Eurotoques Young Chef of the Year competition in 2013. She has previously worked on charter and private motor yachts as Head Chef, cooking for high profile UHNW international clients.

Her menus are product led and seasonal, incorporating sustainable products from local artisan producers as much as possible. She enjoys interacting with guests and strives to create tailor made menus to suit their tastes and exceed their expectations. Working on yachts has allowed Paula to combine her two biggest passions, cooking and travel. 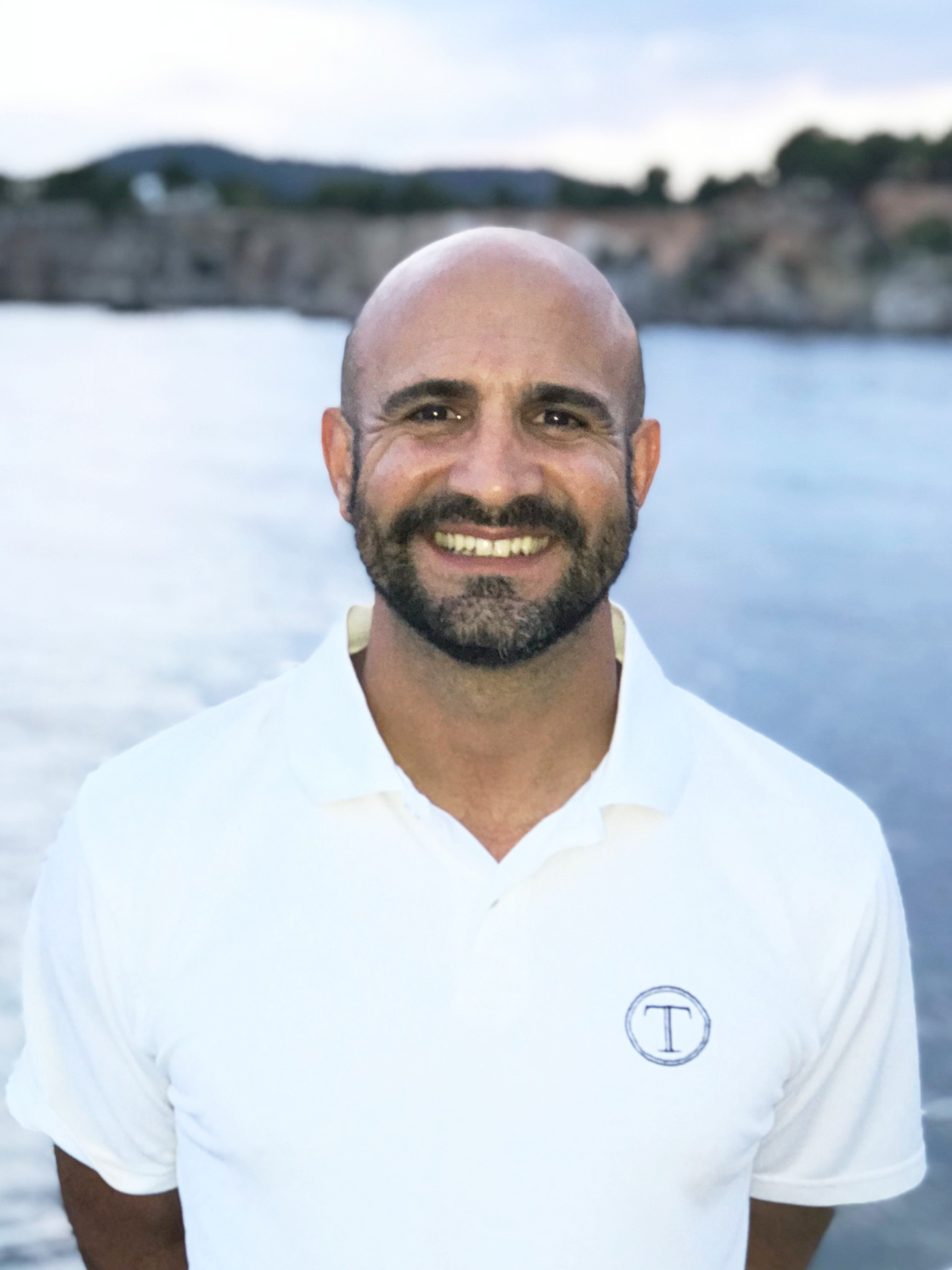 Gonçalo was born in South Africa to Portuguese parents. He spent most of his life growing up inland where he loved playing sports such as tennis, water polo and swimming. However he would relish holidays to the seaside and has always been fascinated with boats.

After school Gonçalo studied Sport Management and entered the corporate race but he would find himself unsatisfied with the normal day-to-day life and felt a big void that just could not be fulfilled.

His inspiration to work on yachts came about when a family friend would visit, telling tales of his life and adventures sailing around the world. Gonçalo would get a feeling of joy and passion upon hearing these tales and quickly decided to follow this feeling inside.

Goncalo has worked on yachts for the past 5 years and has never looked back. His passion lies in the engine room where he is extremely fascinated with how boat systems work but he also loves being outside feeling the wind in the sails. 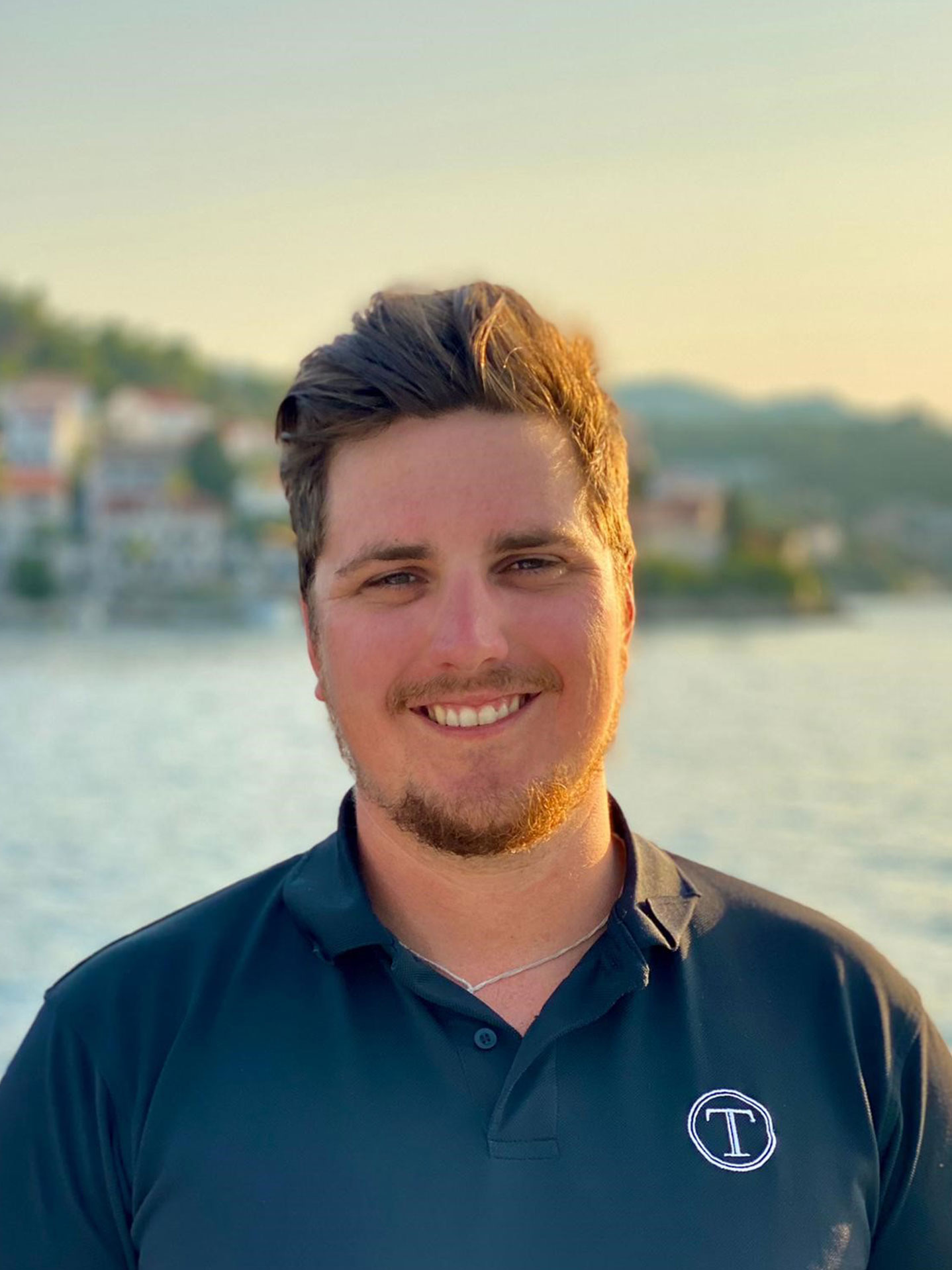 Growing up on the West Coast of Florida, Brian spent most of his time racing dinghies and catamarans. When not on the water, he would be out exploring new areas for flyfishing in Florida Flats.

Once out of Florida, Brian went to the trade school IYRS and studied marine systems, composites, and wooden boatbuilding. Soon after he started his yachting career and has been working as crew or captain on various other Oyster Sailing Yachts across the East Coast of the United States.

As a keen sailor, Brian has always strived for speed on the water. Starting at the age of 7, Brian has been racing sailboats. From an accomplished Lasor Sailor, racing all over North America, even taking a few podiums, Brian has taken his racing to larger boats. Most recently, he was placed 2nd in the Newport – Bermuda race, and winning the NYYC Annual Marstrom 32 catamaran series in Newport RI.

When not on boats, Brian can be found seeking waves, or climbing mountains. A true adventurer, Brian has even spent 6 months hiking 3,500 kilometers along the Appalachian Trail which goes from Georgia to Maine in the United States.
Brian will make sure you have a great experience on Twilight. He will make sure the sailing is not just exciting, but also educational. He is always willing to help teach you the finer arts of sailing throughout your time aboard. 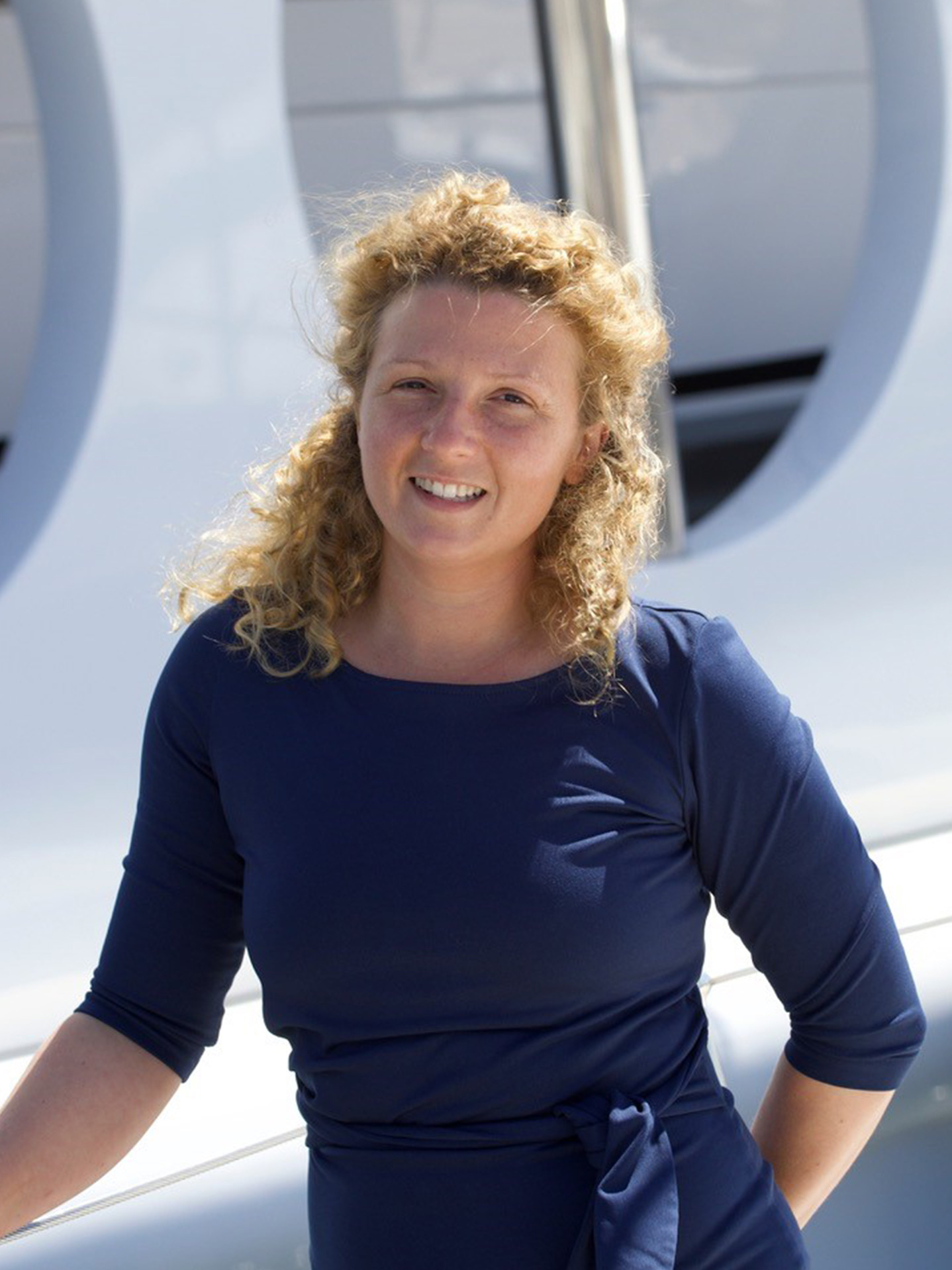 We welcome our new Chief Stewardess. Shani has been in the industry for over a decade and has looked after many guests all over the world, taking her as far as small islands in the middle of the South Pacific.

She began her journey at the young age of 21. Her family moved on to a sailing yacht in her teen years where she fell in love with sailing and the worlds beauty from the oceans.

Shani grew up in London which is a far cry from her chosen life she has today. She did however become one of the best in her trades after working in silver service restaurants, cocktail bars and on holiday resorts.

She enjoys walking and exploring. Shani has recently bought a quaint cottage in Devon’s countryside, which she absolutely loves due to the nature, and of course the beautiful country pubs!

She looks forward to making you feel instantly at home on board Twilight, mixing up your favourite cocktails, creating beautiful dining settings and making sure you and your guests do not lift a finger while staying with us. 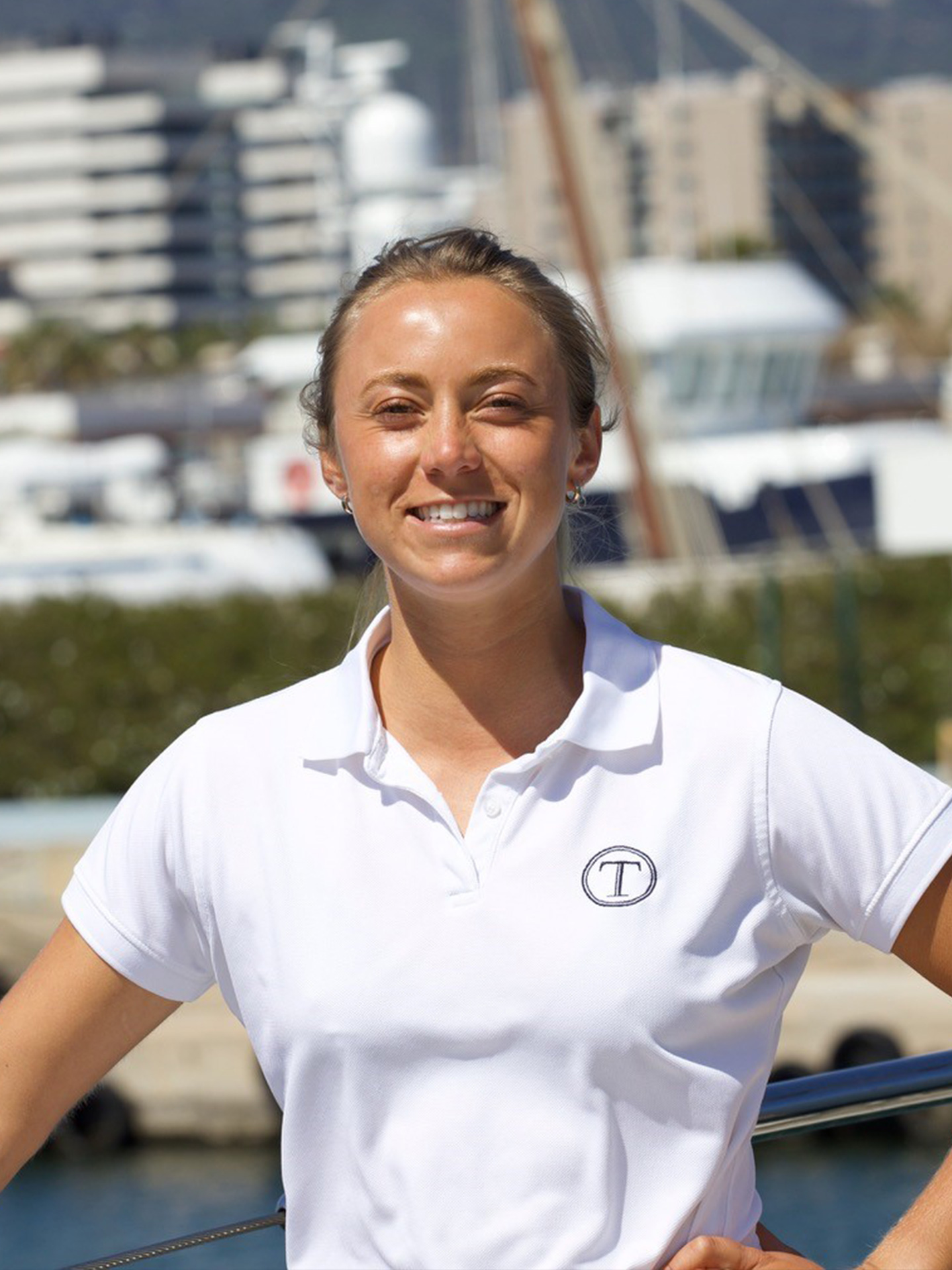 Georgie grew up spending her summers on the north coast of Cornwall, accompanying her dad sailing his original build Laser, water skiing at every possible moment when the tide allowed her and filling the rest of her time wave hunting.

Living with this rhythm of the tides made her a true water baby, making it the priority wherever she travelled to. The one landlocked exception where she has spent a lot of time exploring another passion is where you will find her on a horse in the remote pampas of Argentina, herding cattle and living the simple life. She has also set off on solitary adventures exploring Patagonia, summiting peaks, traversing glaciers and making friends for life.

Her close friends always said they would struggle to see her in an office 5 days a week, therefore a job where she is surrounded by people with their best interests at heart, at the same time as sailing the globe, see’s the perfect match.

She hopes to make your time on board Twilight seamless, sharing a passion for the sea, getting the best out of every day and always game for teaching any keen water-skiers! 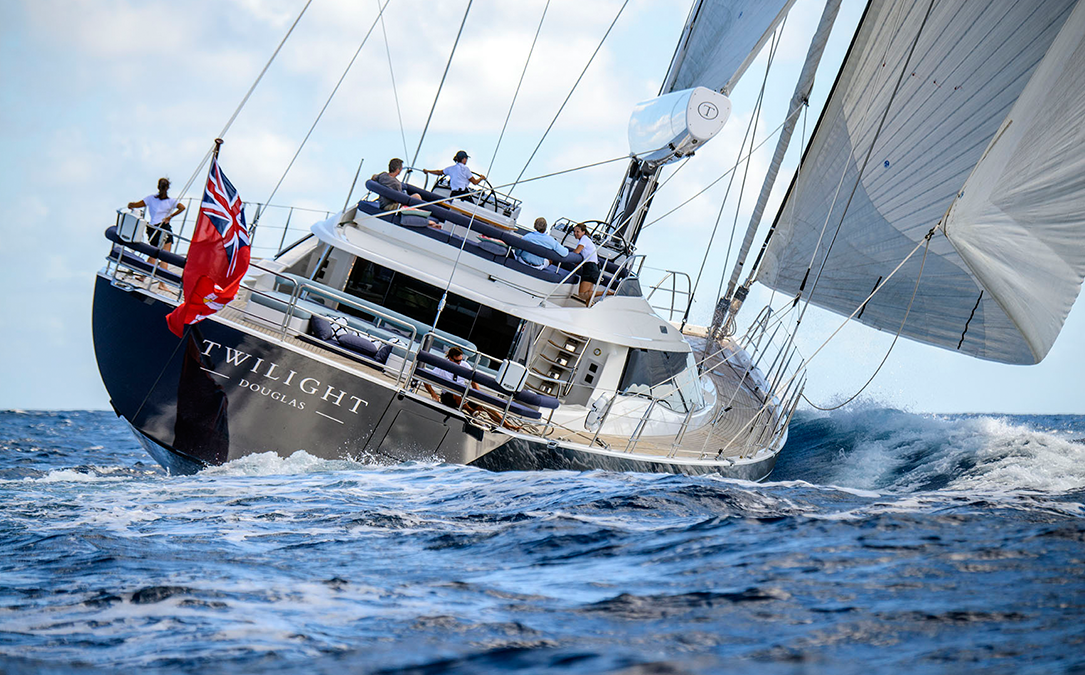 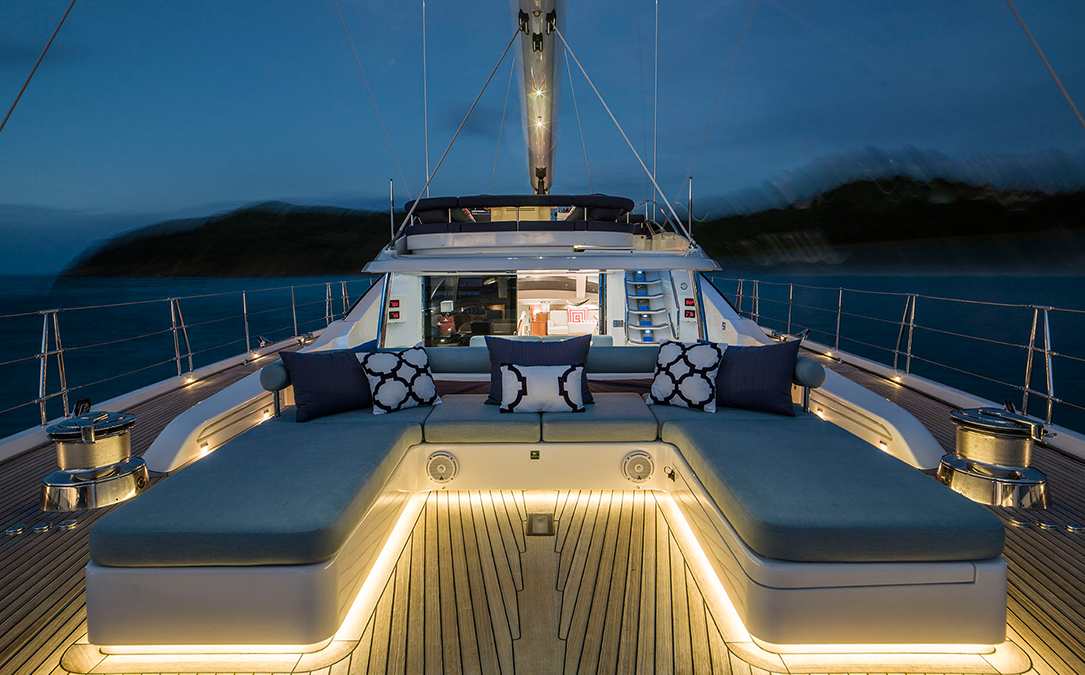 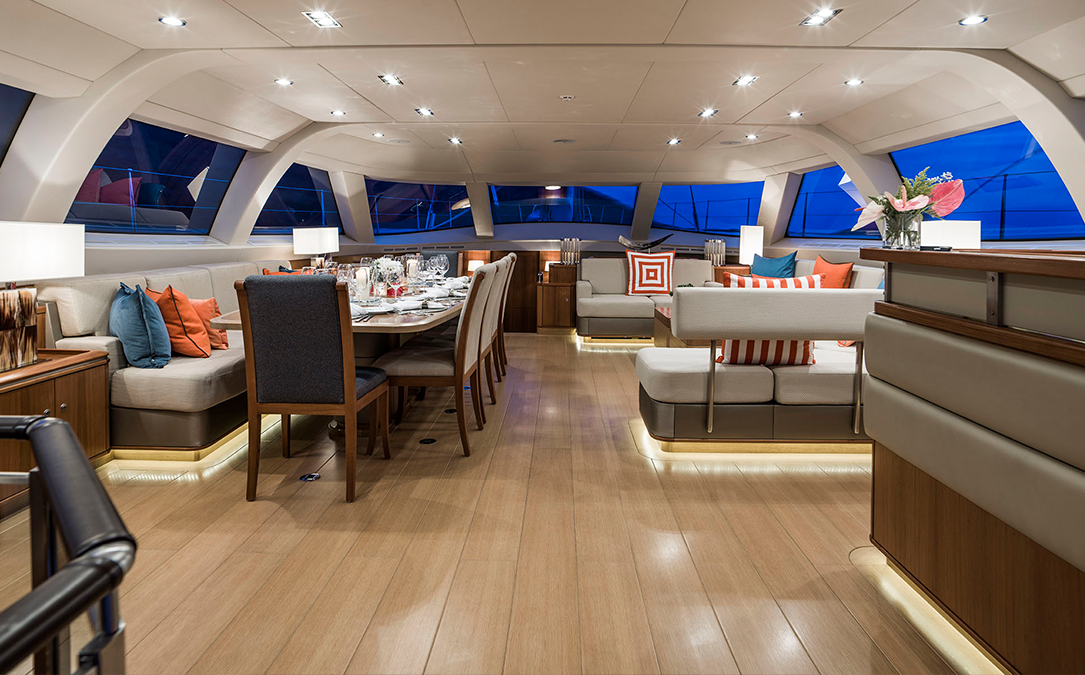 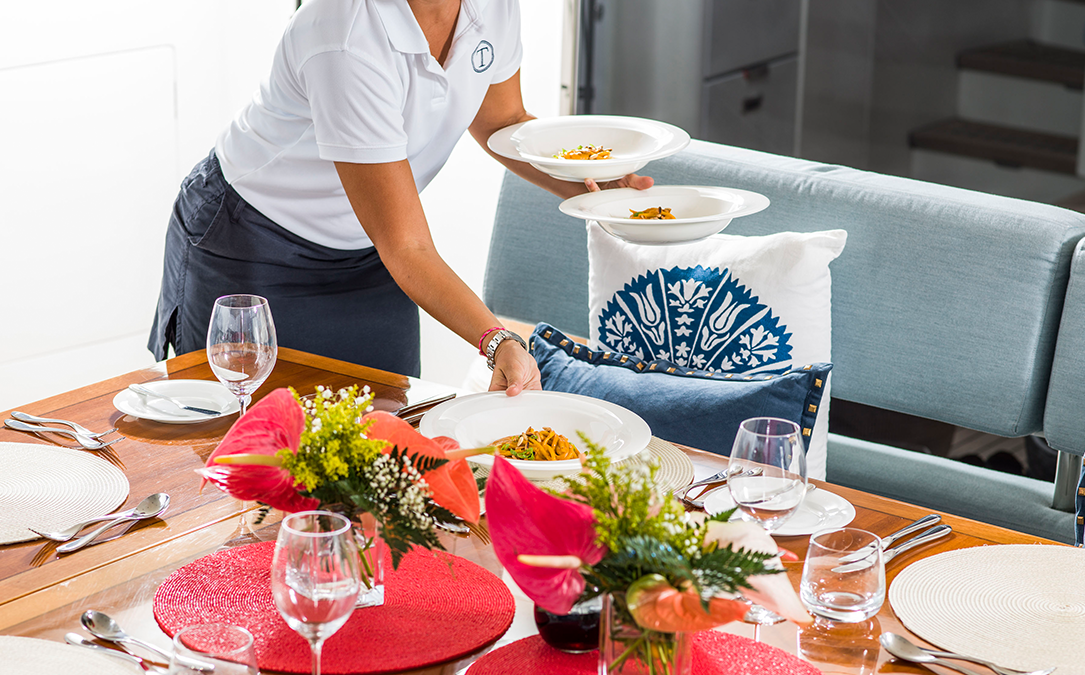